I’ve got some deadlines coming up but I wanted to take a few minutes tonight to mention the closing of a long-time local business, Rosey’s Barber Shop on Huron near Fourth Avenue.

This week, we learned the sad news that Rosey’s Barber Shop, on Huron Street, had closed (thank you @voxphoto and @jqnotjq):

Ross also linked to a photo of the space from decades ago when it was still a gas station. We all know how we feel about gas stations: 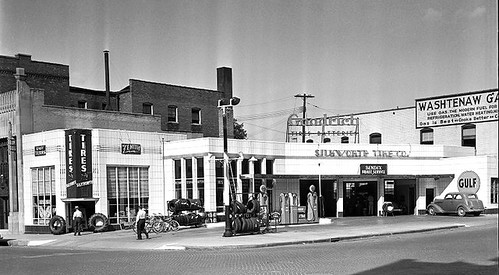 90s kids may remember when the portion of the building nearest the corner was the second incarnation of Vault of Midnight Comics.

The obituary for Rosey at Muehlig Funeral Chapel’s site is worth reading, and although Rosey didn’t share his age, it lists his date of birth. So I did the math for you. At the time of his Ann Arbor News profile above, he had just turned 49, and he lived for thirty more years after.

Rosey’s Fourth Avenue location was one of the very last black-owned businesses in what was once a thriving neighborhood from here to Kerrytown.

One Reply to “RIP Rosey”