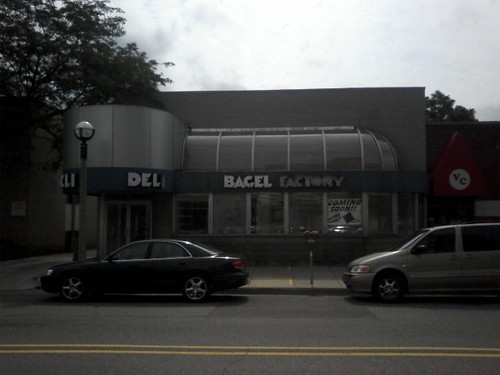 Above, the Bagel Factory deli, Ann Arbor’s flagship for the Fragel on South University. I took that photo over a decade ago and posted it on Flickr just because. (I guess this blog was an inevitability.)

Although Barry Bagels had an agreement to take the space over, it never came to fruition. The structure was demolished, along with the adjacent Village Corner and a couple of other small business buildings, to build the Landmark high-rise apartments at South U and Forest.

(Eventually, a Tim Hortons with a limited bagel selection would open in roughly this location as part of Landmark — it closed after only a couple of years.)

Despite this, Fragels — fried raisin bagels with a liberal dusting of cinnamon sugar — continued to blur the line between breakfast and dessert for years, at MB Bagel Fragel near North Campus. Until this week, when their Plymouth Road shopping center’s new landlords issued an ultimatum: be gone by Thanksgiving.

Though they’d had an inkling — their neighbor, Wings Over Ann Arbor, quietly closed over the summer — they were suddenly put in an impossible position, to vacate by Thanksgiving. They do a lot of catering business, in addition to the usual individuals looking for their Fragel fix.

The new landlords own a medical pot dispensary in Toledo — I can only assume that the passage of Proposal One compelled those landlords to strike quickly to gain a foothold in Ann Arbor. But they were not ready for the Northsiders, and in the end they agreed to extend Bagel Fragel’s lease to the end of 2018, which I guess makes the new landlords a couple of kind buds, in the end.

The above thread seems to imply that maybe Bagel Fragel has a new spot, though it’s not clear. But I hope to get a Fragel before they move out, and if the moves of other Ann Arbor institutions are a good standard to judge by, probably another one in a year or so, with really annoying counter staff who believe their own hype.