I made it to the movies this past weekend to see “The Incredibles 2” with my family. We’ve watched the original many, many, many times — the DVD has been a road tip fixture in each family vehicle. I still remember the first time I saw it in the theater, when it was released. 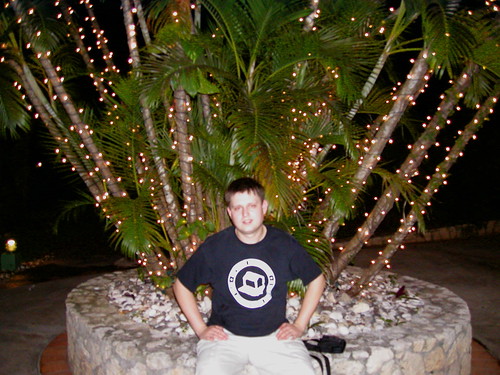 The photo above was taken about two years before I saw “The Incredibles.” I apparently packed a Negativland “Copyright Infringement” shirt for my honeymoon, in case you question my credibility.

I honestly can’t imagine how past-me would react if I could visit him now, ambling out of a cavernous AMC multiplex in Columbus, and confront him with these actual facts about the sequel:

Anyway, in a nearer, more mundane future, I (and some friends of the site) caught glimpses of some future stuff that’s happening to places I’ve discussed recently.

While I was obsessively photographing the dramatic changes to the east side Target store, the west side Target was already getting some updates inside the store. The photo counter and Target Mobile section by the front door are now a Customer Service and Order Pickup desk.

The one checkout lane that was also a customer service desk is now a row of self-checkout stations, as have been appearing in newer Target stores.

And how about the store’s tiny, vertical CVS Pharmacy sign, set far away from the store entrance?

I believe it’s Target’s attempt to reconcile a contractual signage obligation with CVS, and the shopping center management’s restrictions on exterior signs.

In other news, Meijer stores on both sides of town have decommissioned the belt-drive U-Scan machines, encouraged for shoppers with 12-items-plus orders, and replaced the lanes with a mix of the smaller U-Scan machines intended for U12 orders and staffed checkout lanes.

This decision is welcomed by people who view self-checkout as robbing a human of a wage-earning position, this writer included. But to be frank, it’s not an improvement to put more humans at these lanes if they don’t know how to bag groceries. I always group like items on the belt — milk with yogurt, beef with bacon, Dranō with “Mountain Dew Pitch Black.” But I think sometimes the cashiers are taught to place items in the bags to fill them and use fewer bags.

Bags are probably a major consumable expense for grocery stores and this kind of efficiency is probably welcomed in areas where the bags carry a surcharge. Thanks to Lansing, though, Ann Arbor isn’t one of those places, and I swear to you, nary a plastic shopping bag goes to waste in our household. (We have pets, enough said.) Don’t crush my delicate beer with a bag of dinner rolls!

I think this blog was first, and only so far, to report the changes at Speedway on State and Ellsworth. The signs are up all around town at other Speedway stores, looking for employees to staff the new Speedy Cafe. (They may have their work cut out for them.)

Late last week I visited the store and encountered employees and contractors hard at work emptying the shelves and racks during the morning drive time. I was too shy to take a photo then, but A2RS friend Pete was not:

At the time these photos were taken last weekend, Pete reports, the store was out of “most pop flavors and all straws.” I haven’t been by since then to see what it’s like now, but apparently the store will stay open throughout the project to sell gasoline and smokes.