The Target store on Carpenter Road is getting a significant refreshing. It got a minor upgrade a few years ago, to move the electronics to the back of the store and introduce the expanded grocery, but it looks like bigger stuff is happening. Now that I think about it, the roadside signage that was updated over the winter was probably an early clue:

The new sign emphasized the Target logo but lower-cased the name. This is consistent with Target’s current visual identity, but not with anything at the existing Carpenter location. That appears set to change, since a big chunk of the parking lot is now fenced off and filled with shipping containers.

For my money, the coolest use of shipping containers is still Flynn’s house on the dock in the movie “Tron Legacy.” But that’s been covered to death in other blogs, so let’s get back to the retail.

That square patch is almost certainly going to be a larger bullseye logo, probably with “Target” below it, as seen in other more recently built Target locations.

Here’s the most exciting prospect: I think this will take advantage of the seldom-used parking in this stretch of the shopping center and become a second entrance to the Target store. Although other markets have had giant-size Target stores with two entrances for years — the closest local example I can think of is the Coolidge Road store in Troy — Target announced a new store concept at a conference a year ago in which one entrance would maintain the typical “come in for three things and walk out with fifty things” that people love about Target, but the other entrance would be a convenience entrance where you can pick up an online order or get just, like, a gallon of milk. The grocery is so far from the current entrance right now that the bananas are 39 cents a pound, but if you pay an extra $20, you can receive a medal and a souvenir moisture-wicking t-shirt.

They’re also doing something with the little food place up front. Hard to say what this will entail, but more recent Target locations in other areas group the Starbucks counter with the ready-to-eat meals counter and also include a seating area with natural light.  Here’s what it looked like before, as seen at a very similar location in Mansfield, Ohio: 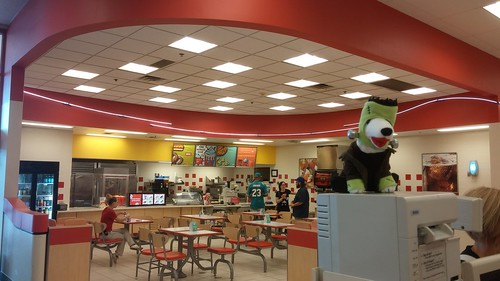 And here’s what a more modern storefront looks like. The windows below the Target sign help bring natural light into the seating area: 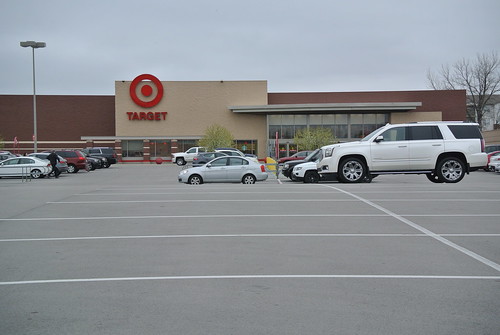 Can we anticipate this here? I think that would be nice. For now, the Starbucks counter remains open in its current spot on the other side of the entrance, and will not close for the day on May 29 as corporate-owned Starbucks stores are slated to do.

That was more than I expected to write about this. I tend to forget than nearly any chain store you ever really liked has a Flickr pool devoted to it and it was good to draw on that for a couple of the Target shots.

The original Ann Arbor Target store, which opened like thirty years ago at Oak Valley Shopping Center on Saline Road, has a new roadside sign that’s JUST THE LOGO with NO LETTERS (sorry, no photo at the moment), so I can’t wait to see how they subvert the common storefront language Oak Valley has had since its inception. 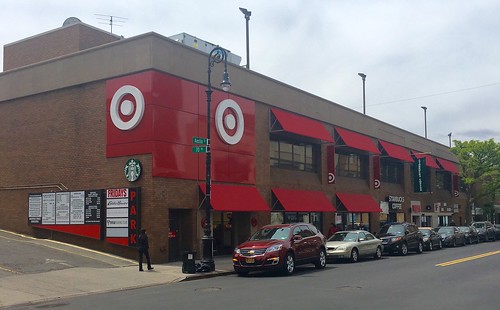 Finally, many Ann Arbor downtown dwellers continue to hold out hope that Target will try its flexible-format concept in a space near them. Where is there available space that could hold even this, though?