Ann Arbor has always had a generous selection of bookstores, but few of them specialized in comics. It’s cold and grey outside, so I’m going to spend some time remembering those today.

Dave’s Comics & Collectibles was situated a couple floors above what is currently a Jimmy John’s at the corner of State and William. It took a twisty flight of stairs to get up but the climb was worth it. Besides the big companies’ comics, they had a wide selection of independent comics and zines — they led me to Milk & Cheese AND X Magazine, which (eventually) led me to Burning Man. 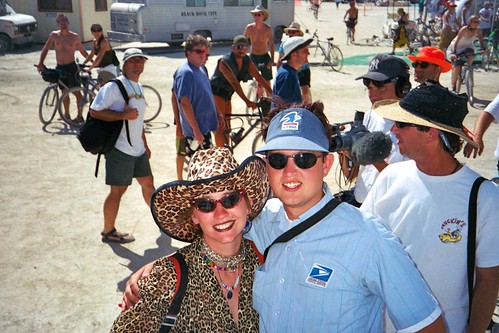 [There I am at Burning Man. Seems like a lifetime ago. I still have the shirt. (C)A2RS]

Dave Hutzley, the proprietor of the Ann Arbor and Royal Oak Dave’s stores, now lives in Arizona. He says he sometimes starts “to lose my mind and think about opening a new shop,” but he seems pretty comfortable selling vintage memorabilia and fan merch on eBay.

On South University, the classic Dawn Treader store (I feel like Dawn Treader deserves a longer post of its own) was replaced in the late 90s/early oughts by The Underworld, which focused on comics, RPG, and tabletop games. Eventually Underworld moved to street level, in the Galleria shopping mall above Pinball Pete’s and below Tower Records. (Its space is now part of the Kaplan Test Prep space.)

Of course, today’s modern comic fan most likely picks up her monthly subs from Vault of Midnight. Before its establishment on Main Street, it moved around a bit within a few blocks. Vault originally opened in a house on Ashley Street, of which no photographs are easily located, then moved to Fourth Street and Huron into that distinctive white building that was apparently a gas station long ago.

(One thing this store had that no Vault before or since did, was actual parking. I think I wrecked my car’s AC driving into the remnants of a fuel-pump island at this location. NO RAGRETS.)

They moved from this location to the underground shops on Liberty Street across from the Federal Building.

In 2010, my disappointment at the closure of After Words (a really good discount book outlet that specialized in remainders and overstocks of quality books) was tempered by the announcement that Vault of Midnight was moving into its space. 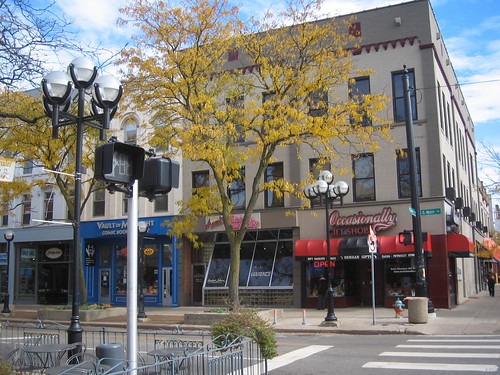 Though Vault has expanded to both Grand Rapids and downtown Detroit since that time, it is a linchpin of Main Street and provides some local color to the increasingly upscale corridor. What good is a two thousand dollar backpack if you don’t have some great comics to put in it? (Personally, I always keep a copy of the My New Filing Technique Is Unstoppable collection in whatever bag my laptop is in, just in case.)

Anyway, I bet I’m missing a comic store or two that I didn’t make it to over the years. Please feel free to share your memories below, as well as whatever book you keep in your bag at all times.

2 Replies to “Fan-tastic and Ink-credible”