The 20-screen theater at Carpenter and Packard appears finally to have completed its glacially-paced rebranding to its current corporate parent, Cinemark.

The theater was originally built in the late 80s on the site of the University Drive-In. Showcase Cinemas opened with 14 screens, a concession stand of then-unprecedented size – at least four counters, and a lobby “art gallery”– matted and framed, mostly kitschy, mass-produced prints.

To keep up with industry trends, Showcase expanded in the late 90s. They built a larger lobby, with hot food options you could construct an unhealthy but comforting dinner from, and more natural light, facing Carpenter Road. This lobby led to the original fourteen theaters to the south, and six brand new theatres with stadium seating to the north. (I very vividly remember sitting upstairs in a lengthy wait line to enter one of the first showings of “Star Wars Episode I, The Phantom Menace,” in 1999. We were so excited to get new Star Wars stories then! We didn’t know about midichlorians, Gungans, or the machinations of the Galactic Senate.)

In 2006, the former lobby space was renovated and relaunched as CyGamZ, a networked-gaming competition space with high-powered PCs and game consoles. Like an arcade alternative, or a turnkey LAN party. Its joyous and photo-packed Facebook page is still very occasionally updated, despite its closure over eight years ago.

In 2009, Showcase gave up on CyGamZ, retreated to the Northeast U.S., and closed or sold all of its Michigan locations. Ann Arbor, along with Flint and Kalamazoo, were sold to Rave Motion Pictures, then a relative upstart in theatrical exhibition. (Their sister location in Westland was completely leveled.) 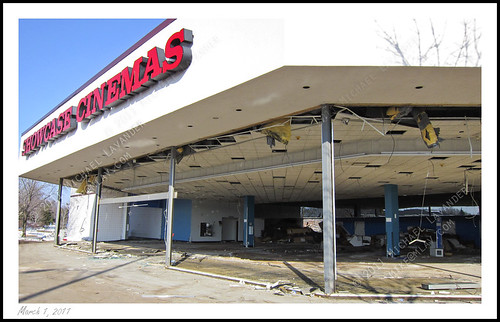 Rave’s first act was to update the exterior paint and signage, while debranding the roadside sign just enough to not get sued, leaving it as the appealingly minimal “CINEMAS.” Below, here’s the sign in 2014.

Rave was acquired by movie behemoth Cinemark in 2013. Though the Rave exterior signage remained, interior livery including staff uniforms started displaying the Cinemark logo soon after — then the Cinemark logo made its way to the roadside sign. Here it is in 2016 with a teeny Cinemark logo:

By 2016, people were getting movies and showtimes on their phones, so they’d stopped putting up film titles and just added two blank panels, presumably in anticipation of outlot restaurants that still haven’t materialized.

And now, it seems, the branding is complete, at least until Alibaba acquires Cinemark, in an effort to match the growth of its Chinese contemporary the Wanda Group, owner of the monolithic AMC exhibitor. (NOTE: This is speculation, not advice, and I am not a shareholder in any firm mentioned above.)