For generations of Ann Arbor people, Drake’s was the first place they ever drank limeade, and the last place they saw selling loose Oreos out of a jar. If you need a Deep Dive Into Drake’s, there is a treasure trove of photos and scanned articles on AADL’s Old News site.

Did you know the Bloomfield Candy Shop originally opened at that space, in 1914? Neither did I. Mr. Bloomfield sold it in 1918. Truman Tibbals, the beloved proprietor of Drake’s, acquired it in 1935. No, I don’t know who owned it in the 17 years between. What am I, Wystan? 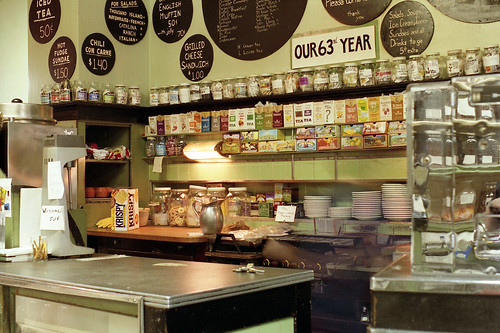 Above: a wonderful gallery of Drake’s in the early 90s, prior to its closing, on Flickr.

Drake’s closed in the mid-90s. I was on the Ann Arbor email listserv (I think there was only the one back then?) and word hit the list that Drake’s booths were being removed but would be provided free to a good home. I angled to get one, but couldn’t pick it up soon enough, and it went to Datastat for their employee break room.

This is what it looks like today, as a Bruegger’s. Yes, expatriates, Michigan Book & Supply is a nice two-floor Walgreens now. I’ll write about that space at a future date.